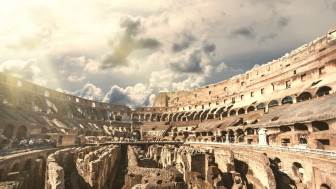 Why choose an e-ticket & self-guided audio tour bundle for Colosseum?

The self-guided audio tour will offer you both historical information and trivia about the site, as well as allow you to determine your own pace during the visit. That means taking your time to absorb the beauty and knowledge as well as pausing and resuming whenever and wherever you wish. Having a ticket beforehand will save you significant waiting time, because you will be able to enter through the automatic scanners instead of the ticket booth line.

How do I enter Colosseum without waiting in line?

Skip the ticket booth line and head directly for the scanners. Scan the QR code of your ticket directly from your phone’s screen and you may enter.

What is the duration of a self-guided audio tour of the Colosseum?

Depending on your pace, you may need up to 3 hours. The tickets are valid for 24 hours after their first validation. Your tickets can grant you 2 total admissions but are valid for 3 sites:

In order to visit all 3, you will have to combine the Roman Forum and the Palatine Hill in one visit.

Can I visit Colosseum anytime during opening hours?

The visit to the Colosseum is time-specific. Your selected time-slot is indicated on your ticket. You will need to arrive 30 minutes early for the standard security screening. No luggage or large backpacks are allowed.

Which Colosseum attractions does your self-guided audio tour cover?

Among others, our team has created stories about the:

What is the best time to take the Colosseum self-guided audio tour?

Taking into consideration the high temperatures and the hot italian sun, you may start your visit either early in the morning (08:30 first admission) or early in the afternoon before the last admission at 18:15. In general you may find it best to avoid rush hours, in order to better enjoy the site.