Put on your wayfarers, sling on a helmet, and hop on a Vespa because we’re going to Rome! There’s never a shortage of things to do in the Eternal City. Culture vultures, cinema lovers, fashionistas & foodies alike all agree on one thing: torn between elegance and decay, Rome is a city of yearning and illusion. Here’s an overview of the top 10 things to do in Rome.

Built-in the heart of Rome between 72 A.D and 80 A.D under Emperor Vespasian, the Flavian Amphitheatre, commonly known as the Colosseum, is the city’s most recognizable landmark. Brutal gladiatorial combats and wild beasts fights, as well as stunning reenactments of famous naval battles, were among the ancient Romans’ favorite shows.

Yet, after the 6th century AD, the amphitheater fell into disuse until it was abandoned completely. Inevitably, its reputation was hammered and shaped through the passage of time; from a popular venue in the ancient times to a ghost of the pagan past during the Middle Ages and an A-list tourist attraction nowadays, the Colosseum is on the bucket list of every traveler when in Rome.

Take a walk around the Roman Forum

Just a stone’s throw away from the Colosseum, the Roman Forum is another must-see attraction for history buffs. You will travel back to the days of Ancient Rome and explore the site that was once the pulsating heart of the Empire, the nucleus of all public life. Moreover, visiting the Roman Forum and the Palatine hill you will gain valuable insights into the political transition of Rome from a Republic to an Empire and you will marvel at stunning landmarks, such as the Basilica Maxentius, the triumphal Arch of Titus, the Temple of Vesta and, of course, the Temple of Caesar, where people until today pay their respects to Julius Caesar leaving flowers and notes on his altar.

It’s almost impossible to find enough words to describe a city like Rome but if I had to choose only one, that would probably be, cinematic! Perhaps few cities in the world have been mythologized as much as the Eternal city. From Fellini’s La Dolce Vita to Paolo Sorrentino’s La Grande Bellezza, the big screen has paid homage to Rome time and again. If you want to toss a coin in the iconic Trevi Fountain, stroll around the antique shops of Piazza Navona, and marvel at the Montecittorio & the celebrated Pantheon, you will find them all scattered around the historic city center. Check out our “Rome City Audio Tour: Fontana di Trevi, Piazza Venezia, the Pantheon & more” to enjoy a leisurely walk accompanied by an immersive audio guide that will introduce you to the city’s highlights. 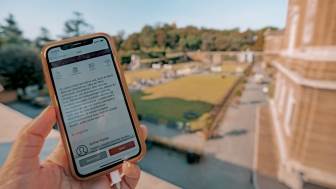 Explore the halls of The Vatican Museums

The Vatican Museums are an unmissable opportunity for those who wish to set out on a stirring journey throughout the centuries and experience some of the finest works of art the world has ever seen. You’ll explore sites of mesmerizing beauty, such as the Greek Cross Room, the Gallery of the Candelabras, Raphael’s Rooms, the Gallery of the Maps, the Gallery of Tapestries, and the contemporary art apartments among many many more. Your visit to the Vatican Museums, of course, culminates with the Sistine Chapel, where you’ll marvel at Michelangelo’s stunning frescoes, “The Creation of Adam” & “The Last Judgement”.

See the city from above from Castel Sant’Angelo

Situated on the bank of the river Tiber, the historic Castel Sant’ Angelo was initially constructed by Emperor Hadrian as an Imperial Mausoleum. It later became a fortified castle to which the popes sought solace when the city was in peril. Among the castle’s highlights is the Sala Paolina, richly adorned with Perino del’ Vaga’s frescoes and the Room of Cupid and Psyche covered with scenes from Greek Mythology. You will also have the chance to take in a breathtaking panorama of the city from the castle’s terrace ( it is where the dramatic ending of the opera Tosca is set!) and take glimpses of the famous Passetto di Borgo, the once-secret passageway of the Popes. 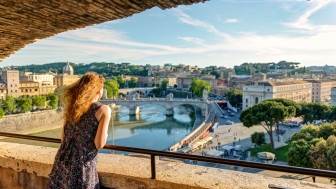 Spend a day at Villa Borghese

When it comes to greenery, all roads lead to the Villa Borghese, the most popular park in Rome, located on the Pincian Hill, close to Spanish Steps and Piazza del Popolo. Once you enjoy a refreshing walk through the lush green gardens, visit the elegant building which houses the Galleria Borghese with a stunning collection of paintings and sculptures, including Baroque masterpieces of early Caravaggio and Gian Lorenzo Bernini.

When a friend says Rome, probably the first thing that springs to one’s mind is the imposing view of St. Peter’s gigantic dome dominating the city’s skyline. St. Peter’s Basilica is a top attraction not only for religious pilgrims but also for art lovers, who want to marvel at exquisite works of Renaissance art and architecture designed by Bramante, Giacomo Della Porta, and Maderno among many, many others. One of the Basilica’s highlights is undoubtedly Michelangelo’s Pietà and St. Peter’s Baldachin, the monumental canopy designed by Gian Lorenzo Bernini that marks St Peter’s tomb. 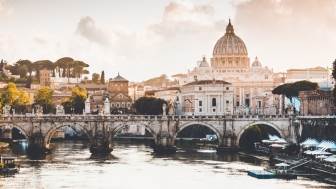 The Italian flair for fashion and all things beautiful is proverbial. If you want to shop or window-shop (it depends on your budget), a stroll down Via Condotti leading directly to Piazza di Spagna is a must. Palazzo Fendi, the flagship boutique of the famous Italian fashion-house is easy on the eye; from its collections to its architecture and its ever-changing installations created in collaboration with emerging artists, the palazzo is sprinkled with fairy dust.

Another thing you’ll love about Rome is the food markets. Visiting one or more is unquestionably one of the 10 things to do in Rome. There’s the popular Campo de’ Fiori market taking place under the statue of Giordano Bruno with a large range of fruit, vegetables and the all-time classic spices that jazz up our favorite Italian dishes. I suggest that you also check Piazza San Cosimato, which is a great way to combine your market stroll with a visit to one of Rome’s most picturesque neighborhoods, the famous Trastevere.

For those who wish to find their way off the beaten track and discover the edgy heart of Rome, the list is endless. I will try to narrow it down a bit to stick to my top 10 list and focus on one single theme: Rome’s most rebellious and free-spirited soul, the director, writer, and intellectual Pier Paolo Pasolini. His murder in the 70s prompted an outcry in Italy and turned him into an icon in the streets of Rome, where you are bound to stumble upon numerous murals and poster art pieces as you roam around the more alternative neighborhoods of Rome, such as Pigneto and Testaccio.

If you find yourself in Pigneto, a visit to the famous restaurant Necci, Pasolini’s favorite drinking destination, is a must!

Tip! To make the most while visiting Rome’s top attractions, its vast museums, and archaeological sites, don’t forget to book your skip-the-line tickets in advance and combine them with an insightful audio tour that will shed light upon the history and the secrets of the city’s timeless treasures. Check out Clio Muse’s skip-the-line ticket and audio combos and fire up your sightseeing experience!