How does someone go about getting a feel about an unfamiliar city? Especially one as historical and multifaceted as Alexandria? Most western visitors may receive their first introduction to the charms of this metropolis through the incomparable poetry of Constantine Cavafy or the evocative novels of Lawrence Durrell. However, for those able to access Arabic literature, the Egyptian novelists Edwar al-Kharrat, Ibrahim Abdel Meguid, and Naguib Mahfouz have painted exquisite portraits of this beloved city. The prominent ArabLit Quarterly magazine selected Mahfouz’s “Miramar,” set in the early 1960s, as one of the five Arabic books to read before you die.

Rising between the expansive Mediterranean sea to the north and the verdant delta of the river Nile to the southeast, Alexandria has something to offer to everyone. After more than two thousand years of history, it would be strange not to. From the moment Alexander the Great decided to build a great city to the present day, Alexandria has attracted every significant power in the Mediterranean (and beyond), constantly reinventing itself to accommodate the ever-changing needs of new residents, faiths, and cultures. After a couple of hours, wandering its streets is a beautiful introduction to the history of a city that captivates hearts and minds.

The city built by Alexander is almost completely gone. Most of it lies at the bottom of the harbor, a challenging archaeological site for brave archaeologists seeking to retrieve its glory. Whatever suburbs and monuments remain on dry land are often built over or drastically changed with new construction. However, the memory of these pioneering days and the glory of ancient Alexandria survive in an unlikely place: the Citadel of Qaitbay.

This medieval fort occupies the northern tip of Pharos Island at the mouth of the Eastern Harbour. The citadel was built where the famous Lighthouse of Alexandria once stood. This impressive structure was considered one of the seven wonders of the ancient world. Unfortunately, it collapsed due to numerous earthquakes, and many granite blocks litter the surrounding waters.

The lonely column known as Pompey’s Pillar has been a landmark since Publius, the governor of Egypt, dedicated the monument in honor of Emperor Diocletian following the latter’s suppression of a nasty revolt in 297. It rises beside the ruins of the Serapeum, a complex including the temple of Serapis with the god’s impressive marble statue and an extensive library. Serapis is a fine example of the Hellenic rulers’ attempt to find a deity to unite them with their Egyptian subjects. The nearby catacombs of Kom El Shoqafa are a vast multiroom funerary complex consisting of three levels cut through solid rock in the 2nd century CE. The principal tomb is a beautiful blend of Greek, Roman, and Egyptian elements. What began as the final resting place of a wealthy woman and her family expanded over two centuries into one of the Seven Wonders of the Middle Ages.

The rise of Islam and the collapse of Roman power and influence in Egypt ushered into Alexandria’s new period of prosperity. The Al Mursi Abu Al-Abbas mosque rises over the tomb of a famous teacher and Sufi saint who died in 1287. The tomb became a place of pilgrimage for many Muslims from as far as Morocco on their way to Mecca. The mosque covers an area of 3,000 square meters (32,292 square feet), making it the largest mosque in Alexandria. But the nineteenth century truly transformed the city into an unparalleled cosmopolitan destination. Next to the old Ottoman quarter, inhabited by the Turkish and Egyptian population, appeared a new European town, built and occupied by the foreigners who flocked to Alexandria in search of financial opportunities.

The palaces of the khedive and the affluent Alexandrians dot the urban landscape. Salamlek Palace and the Al-Haramlik Palace in the Montaza district recall a period when the city became a sort of Egyptian Riviera full of luxurious hotels, sporting clubs, and organized beaches full of palm trees that transformed Alexandria into an ideal summer resort. The residence of Fatima Al Zahraa Haider, the great-great-great-granddaughter of Muhammad Ali Pasha, houses the Royal Jewellery Museum. Visitors can admire a veritable cornucopia of gold objects and artifacts covered in precious stones.

The Alexandria National Museum opened in 2003 in a building that belonged to Al-Saad Bassili Pasha, a wealthy timber merchant who built his residence in the popular Italianate style of the period. The palace was a focal point for the fashionable society of Alexandria. The Eliyahu Hanavi Synagogue has become an enduring symbol of Alexandria’s struggle to come to terms with its past and a testament to Egypt’s desire to protect its rich heritage. The synagogue once served a community of 40,000, but it is now often impossible to find the minimum number of ten worshippers required by Jewish tradition to hold religious ceremonies.

Constantine Cavafy is among the most significant Greek poets of the twentieth century. E. M. Forster described him as “a Greek gentleman in a straw hat, standing at a slight angle to the universe.” At 22, he settled in Alexandria and lived here for the rest of his life. In 1992, his house became a museum dedicated to his life and work. Perhaps here and in Cavafy’s imaginative use of history in his poetry, Alexandria truly comes most alive. 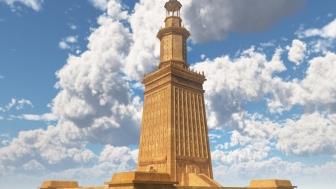 Alexandria: The Bride of the Mediterranean
Audio Tours
9,99€ 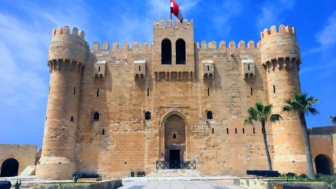 The Citadel of Qaitbay: the eternal fortress
Audio Tours
11,99€