The award-winning Photography Museum “Christos Kalemkeris” of the Municipality of Kalamaria partnered with Clio Muse Tours for the creation of a virtual tour experience that presents the story of 40 Greek Railway Stations and their important role in the economic, commercial and social development of the country. The virtual tour experience “40 train stations and the history of Greek railway” was developed on Clio Muse’s Tour Experience platform using the museum’s valuable photographic archive and 360° photos. It is available in English and in Greek on the museum’s official website.

This is the first part of a multidimensional project that the Photography Museum “Christos Kalemkeris” of the Municipality of Kalamaria aims to develop based on its award-winning archive that unfolds the history of the Greek railway network. 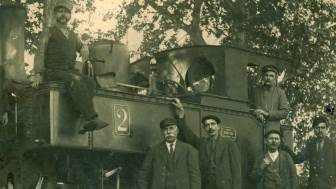 The “40 train stations and the history of Greek railway” self-guided virtual tour experience narrates the history of the country’s railway network from 1869 to 1969 through 40 points of interest that are depicted in the past through the rare photographic material of the Museum of Photography “Christos Kalemkeris” and at present through 360° photos.

Each stop is accompanied by an insightful story that was composed after extensive research by the Clio Muse Tours’ Content Department in collaboration with the museum’s President Of The Board Of Directors Pavlos, Ch. Kalemkeris. The combination of old and current images with informative narrations takes visitors on a journey that connects the past heritage with the present and to our future.

From Orestiada and Didymoteicho to Alexandreia, Lechonia and Velestino, this tour presents cities, stations and railway constructions. Users will have the opportunity to digitally travel through Greece of the past and present and learn about the socioeconomic impact of the railway network.

According to Mr. Kalemkeris, Clio Muse Tours was chosen to start with this versatile but unique project, as a result of its company’s credibility, the personal relationship with its customers, its task efficiency and corporate identity for staying loyal to the purposes of cultural heritage and tourism using effective technology and extroversion tools.