Among the numerous cities that were founded by the Ionian Greeks on the western coast of Asia Minor, Ephesus is the best-preserved one.

This ancient city has fascinated the archaeologists, travelers, and tourists for a long time, and for a multitude of reasons: its history, architecture, cultural legacy, and last but not least, the religious cults so firmly entwined with the very existence of Ephesus. The visit to the archaeological site of Ephesus offers the visitors a unique opportunity – a glimpse into the life of the inhabitants of this city, their multicultural background, everyday activities, and public events.

According to Greek tradition, Ephesus was founded by a prince called Androklos, the son of Codrus the king of Athens, who intended to settle in Asia Minor. Before setting off, he had consulted the oracle. As an answer, he heard the enigmatic advice to choose the place indicated by a fish and a wild boar. This unclear answer did not discourage Androklos who set on the voyage across the Aegean Sea.

One day, while preparing a meal and roasting fish, one of them jumped out of the fire, a lump of burning coal fell into the bushes and scared away a wild boar. It was a clear sign for Androklos that indicated the right place for a new settlement. He founded a new city in an excellent location, at the shores of the deep gulf that protected the harbor.

The place where Androklos wanted to settle had already been inhabited by the local Anatolian tribes, called the Leleges. The relations between them and the newly arrived Greeks were not always friendly. Androklos was a fearless warrior and assisted other Greek settlements in the neighborhood in their conflicts with the Leleges. During one such battle, fought by the people of Priene, the brave prince was killed. The Ephesians carried off his body and buried it in their own land. It is widely believed that the Hellenistic Heroon in the heart of Ephesus is the mausoleum of the city’s founder.

Nowadays, the archaeological site of Ephesus still attracts visitors from all over the world. The site is large and offers an opportunity to walk along the ancient streets, paved with marble and decorated with beautiful mosaics. The city’s two main arteries: the Arcadiane and Curetes Street still connect the main sights of the city. If you would like to see Ephesus and make most of the visit, the best idea is to do the audio-guided tour. This kind of experience offers a unique opportunity to understand who Ephesus functioned in its heyday. At the same time, you do not need to hurry through the ancient city, and you can enjoy the whole experience at your own pace.

During the tour, you will see the most characteristic building associated with Ephesus, the Library of Celsus. The beautiful two-storied façade of the library is decorated with the statues represent the Four Virtues of Celsus: Sophia (Wisdom), Arete (Excellence), Episteme (Knowledge), and Ennoia (Thought). The library was reconstructed in the 20th century, as the result of an enormous effort of the archaeologists. The magnificent monumental Gate of Mazeus and Mithridates stands just next to the library, leading into the Commercial Agora of the city. 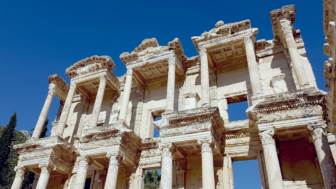 Ephesus: the Ancient Pearl of the Mediterranean
Audio Tours

The “Ephesus: the Ancient Pearl of the Mediterranean” self-guided audio tour also offers a chance to understand how the Ephesians lived their daily lives. They bathed at public baths, such as the Baths of Faustina. They enjoyed the abundance of freshwater from the mountains, supplied by three aqueduct systems. This water was distributed to public fountains scattered throughout the city, such as the splendid Trajan’s Nymphaeum. The Ephesians could also use Public Latrines where they sat next to each other not bothered by the lack of intimacy but rather glad to exchange the latest gossip.

Another aspect of the tour is an insight into the public life of Ephesus, centered in the area of the Public Agora.

It served as a place for official and public meetings and as an open-air classroom where philosophers taught their students. Next to it stands the Prytaneion, the religious and political center of the community. The sacred fire of Hestia, the goddess of the hearth, once burned inside it. The city council met in the building nearby, the Bouleuterion. It was simultaneously used as an odeon, i.e. the place of artistic performances.

However, the primary location of the public entertainment in Ephesus was the Grand Theatre where, quite possibly, the first gladiatorial games in Asia Minor took place. They also participated in chariot races held in the stadium outside the city walls. 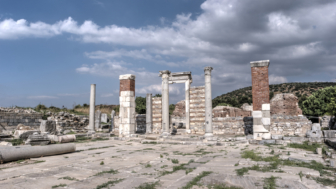 Finally, let’s not forget about the spiritual needs of the Ephesians. The city had several significant temples including the ones dedicated to Roman Emperors such as a massive Temple of Domitian. Even Egyptian deities were worshipped in the city, for instance in the so-called Temple of Isis on the Public Agora. Later, Christianity arrived at Ephesus, and an enormous Church of the Virgin Mary was constructed.

Ephesus at its greatest was a wealthy and multicultural city where more than 200,000 people used to live. Over the centuries, the city’s landscape was shaped by the palimpsest of civilizations, each of them adding to the rich history of Ephesus. 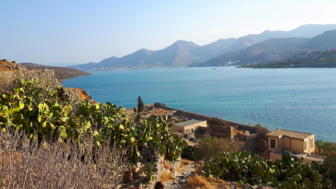 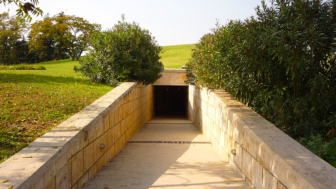 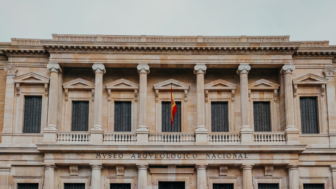