Reading ‘Greek to me. Adventures of the Comma Queen’ by Mary Norris

Mary Norris has been a hero of mine for some time now. After decades of working as a copy editor for The New Yorker, she became known to the public as the Comma Queen through her video series on language and all its facets.

A series I implore you to watch! When I found out that this brilliant person has written a book about Greece I was, to say the least, intrigued. Being Greek myself and an archaeologist I knew I had to read Norris’s book. As Norris writes ‘Sometimes you read something at exactly the right time’, and I agree. In the case of this book, though, there is no wrong time to read it. Greek or non-Greek.

‘Greek to me’ traces Norris’s decades-long relationship with Greece, from University classes to theatre plays, and trips to the country itself. Discussions on the phenomenon of language interlock with prose devoted to the writer’s life from her childhood in Irish Catholic Cleveland to adulthood on the copy desk of The New Yorker. Norris has a unique way of writing about history and language. She achieves to be informative, interesting, but in no way scholarly.

If you decide to read this book you should be prepared for a few things.

Words made of clay

“I like to think that the first letters were incised into clay and that writing therefore, came from the earth. And because the earliest writing to survive was epic poetry, which invokes the gods, writing connects us earthlings to eternity.“

Norris loves letters, language, and all in between. She writes about the alphabet -her favorite letter is Ψ- the construction of words, how pronunciation can lead to a completely different meaning, and more. She believes she has not mastered Greek, but this does not stop her from discovering the beauty in it, how words shape our experiences. She refers often to the epithets of Homer and the headaches they have given to translators. An example stands out. At some point, Homer refers to the wine-dark sea which has baffled readers who know that the sea is blue. Some argued that Greeks did not see blue, but this, Norris writes, makes no sense for people who ‘live in a world of blue’. Thus, Norris offers her own explanation: “What came to me as I sipped my ouzo and gazed at the Aegean was that Homer wasn’t saying that the sea was the color of the wine. He was saying that the sea had the depths found in a cup of wine: that it was mysterious, hypnotic, dangerous. ‘Wine-dark’ was a quality, not a color. It drew you in, you could lose yourself in it.” I find this a beautiful idea as it is, also, close to how Greeks think of the sea. The sea gives us life, but it can also take it away. 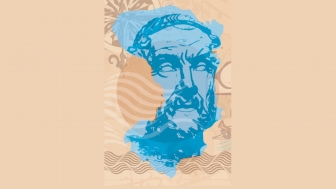 Athena, the protector of the copy editor

Norris will inspire you through Greek mythology. The Greek Gods become role models for her. She writes: “Until that day in the lecture hall, I had been afraid to grow up, to trade in my girlhood for the life of a woman. Professor Zeitlin’s class had woken me to the fact that I could have other models: be a bitch, be a huntress, be an Amazon, be a maenad, one of the crazed followers of Dionysus. Mythology taught me that I didn’t have to limit myself to virgin, bride, and mother -there were many more roles to play. […] I didn’t have to be constrained. I could let myself live.” If you have read the story of the fig tree in Sylvia Plath’s ‘The Bell Jar’ -where a woman grows old not being able to decide between all the possibilities stretching in front of her- you will feel how liberating the phrase ‘I could let myself live’ can be.

Norris will teach you how and why to travel alone. Granted, traveling alone comes with a few obstacles… ‘Dining alone in restaurants, I was a tourist unto myself. Eating is social, and the style of Greeks is to share a lot of different dishes.’ But, traveling alone can lead to ‘self-determination’. According to Norris ‘When you travel alone, you are forced to engage with people… When you are with someone from home, it is too easy to stay comfortable, in your own idiom and daily regimen and character. You never have the feeling of alienation that is so formative to experience in a strange place.’

Indeed, it is this independence that can offer the deepest insights into your soul. Norris’s descriptions of her thoughts and realizations while in Elefsina or skinny dipping under Patrick Leigh Fermor’s house in Mani will stay with you forever.

The beauty of traveling alone is, to me, one of the most important things this book has to offer. I discovered I liked traveling alone in 2014 when I found myself in Stockholm for an internship. Whenever I had time, I would go out into the city and explore it on my own. It was in a café after a museum visit when it hit me. If I am alone, I am independent. I get to decide what, where, how, and for how long. Which is amazing for one simple reason. Being the one to decide, without having to consider the needs of someone else, you realize what it is you truly want to do. I have found that if you can answer the question ‘What do you want?’ you will discover how to let yourself live. Choosing to travel alone does not mean you lead a lonely life. It means that you build a good enough relationship with yourself, that being with others is a choice, a valuable addition. I learned a lot in Stockholm during this time, but the beauty of traveling alone might be one of the most formative things I gained. Since then I have made a point to visit cities or add extra days to trips with friends to be with myself, and I am currently planning my next solo trip. Tip, eating alone is not so bad, you will be too tired/hungry/cold to care.

‘Greek to me’ is about a woman taking chances, finding herself, understanding her relationships, getting over trauma, and finding passion in the everyday. It is a book about what immersing one’s self into a different culture can offer, about what traveling can be.