In collaboration with Kentriki Odos, we created three new cultural audio tours for places that adorn Greece’s mainland. Home to magical and enchanting landscapes filled with legends and traditions, Greece brims with hidden gems. And we are always delighted to form collaborations with partners that share the same vision as we do and are eager to highlight lesser-known places. Join us on a road trip along the E65 motorway and travel with us from Thessaly to Macedonia.

Kentriki Odos is the company that undertook the design and construction of Aftokinitodromos Kentrikis Ellados S.A., E65 which connects Eastern Greece to Western Greece. This motorway crosses the region of Thessaly and passes the major Greek cities of Karditsa, Trikala and Kalambaka. Spanning among the Othrys mountains, the plains of western Thessaly, the Penaeus river and the mountains of Chasia, E65 takes visitors to breathtaking landscapes.

Though these magical places are often overlooked by travelers, they have an abundance of natural wonders and fascinating untold stories. These stories shape not only the country’s present but also its future. Every city and small village in Greece’s hidden corners has its own unique legends that date to antiquity and survive to the present day. Each place is shaped by its past and the events that took place over the centuries. And we believe that listening to these historical facts and myths along the way, will make your trip an unforgettable experience. 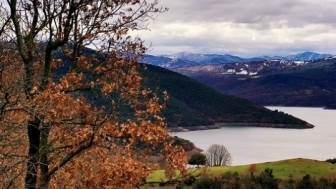 Thessaly: the homeland of nymphs and heroes
Audio Tours
Free

Thessaly: the homeland of nymphs and heroes

“Thessaly: the homeland of nymphs and heroes” self-guided audio tour takes travelers on a journey through unknown locations of Thessaly, revealing the thrilling history of the area. Seventeen stories introduce travelers to prehistoric settlements, thermal springs, temples of gods and nymphs, legendary antique cities, and sublime Byzantine churches. The points of interest of this tour include the Acropolis of Ancient Proerna, Kaitsa baths and Smokovo thermal baths.

From Meteora to Paleokarya: the legends

With the Kentriki Odos’ self-guided cultural audio tour “From Meteora to Paleokarya: the legends,” travelers delve into an iconic site of natural beauty and great religious importance. The tour passes through Meteora and ends at the 16th-century stone bridge of Paleokarya. Along the way, you’ll learn about the Kursum mosque, the Peneus river and the Karaiskakis cave.

The third of the Kentriki Odos’ cultural audio tours, “Where Macedonia meets Thessaly” sets off the legendary Olympus Mountain. The self-guided audio tour passes through monuments and cities that reflect the glorious past of that area. Nine stories narrate the traditions and customs of locals and the history of the monuments. The Byzantine castle of Servia, the Church of Saint Nikolaos Perivoliou and an unknown but highly important ancient city are some of the places you’ll meet en route.

Why was ancient Trikki such an important city? Which monastery was cursed? Why was the castle of Serbia such an important strategic point? Do you know the name of one of the most famous antique cities that now is completely forgotten?

Find out the answers with Kentriki Odos’ cultural audio tours and travel in Greece’s mainland through immersive stories. 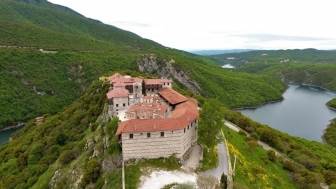