On the occasion of the 200 years of the Greek War of Independence, Clio Muse Tours created in collaboration with remarkable museums four educational self-guided audio tours. Each one of the tours presents important historical events and examines the different aspects of the Greek War of Independence. For the completion of these tours, we teamed up with professionals of the culture industry including historians, archaeologists and curators and we worked together with iconic cultural institutions. These projects have been included in the National Programme of Anniversary Projects and Events under the auspices of the “Greece 2021” Committee.

The National Historical Museum collaborated with Clio Muse Tours for the development of the digital tour of its anniversary exhibition “REVOLUTION ’21 REFRAMED – ΕΠΑΝΑCΥΣΤΑΣΗ ’21.” Through 257 stories of 57 items of the museum’s collection, this intriguing digital tour illuminates invisible aspects of the revolution. Parts of the digital tour are enhanced with 360 degrees photos allowing visitors to take a virtual walk through the museum’s halls. Exhibits such as portraits of the warriors as well personal objects, parts of their uniforms, their weapons and musical instruments are showcased through 360° images and narrations.

From the multicultural Ottoman Empire to the intellectual and economic revival of Hellenism and the foundation of the Filiki Eteria, “REVOLUTION ’21 REFRAMED” explains the conditions of the birth of the Greek state. Along the way, visitors learn about the international political scene, the warriors’ stories, customs and habits and how the outcome of the most important battles affected the war. Within the first few months of the release, the tour has over 16,000 views.

The Embassy of the Kingdom of the Netherlands in Athens

On the occasion of the celebration of the 200 years of the Greek War of Independence, the Embassy of the Kingdom of the Netherlands in Athens wanted to honor and highlight the role of Dutch philhellenes. Being already familiar with the vision and mission of Clio Muse Tours from the time the company was taking its first steps in Orange Grove, the platform that supports young entrepreneurs in Greece, they turned to us for a potential collaboration.
The digital audio tour the “Dutch philhellenic movement: the rise and fall” came to life a few months later after extensive research. Clio Muse Tours’ Head of Content, Christina Ntaltagianni was leading the project working side by side with Dr. Tatiana Markaki, Chair of the Department of Modern Greek Studies at the University of Amsterdam, the Dutch Institute of Athens, and Jamilla Peeters, MA conservator.

By choosing characteristic points of interest that serve the Embassy’s goal to highlight the Dutch philhellenic movement and its beneficial role in the Greek War of Independence, this digital audio tour aims to create an imaginary bridge between the Netherlands and Greece. 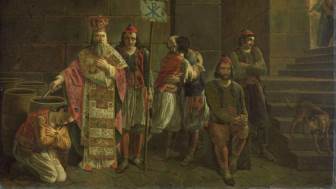 The digital tour starts with the story of Adamantios Korais since he moved to Amsterdam and how he played a major role among the representatives of the Modern Greek Enlightenment, which lead to the Greek War of Independence. Moreover, visitors learn about the initial philhellenic actions that took place in 1821, as they were captured by the local newspapers such as Journal de Gand April 1821, Arnbemsche Courant and the Gravenbaagsche Courant. It continues by narrating the story of the first Philhellenic committee that was founded by a group of floral citizens in 1822 in Amsterdam who were asking for donations for the “desperate Greeks”, and the dozens that followed spread all over the country. Another aspect that the tour analyzes is how the Greek War of Independence became a great inspiration for the fine arts and literature. Uses can admire famous paintings such as ‘’The last defenders of Missolonghi by Joseph Denis Odevaere, Ary Scheffer’s ”the Souliotises” and ‘’The battle of Dervenakia’’ by Barend Cornelis Koekkoek.

We would like to thank the Rijksmuseum, the Benaki Museum, the Athens War Museum, Dordrechts Museum, Thanassis, and Marina Martinos Collection, and Groeninge Museum for granting us the license to use and publish photos of the iconic artworks exclusively for this digital tour on the occasion of the 200 years of the Greek War of Independence. 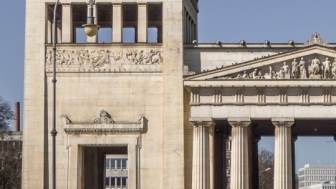 The Consulate General of Greece in Munich

The Consulate General of Greece in Munich worked together with Clio Muse Tours to design the self-guided digital tour “Isar Athen.” Taking place in Munich, this tour aims to showcase the city’s monuments and landmarks that are designed based on ancient Greek architecture with neoclassical elements due to the King’s philhellenism. Through 10 stops and 30 stories, we learn about the Munich of the 19th century and how it transformed to Athens of Isar. The tour kicks off at Königsplatz which translates to the King’s square and is home to important landmarks of the “Athens of Isar.” A walk by the Propylaea of Munich, the Glyptothek and the Staatliche Antikensammlungen sets visitors in the mood for what they are about to experience. The tour continues to the Neue Pinakothek, Monopteros temple in the Englischer Garten and Salvatorkirche.

A journey to revolutionary Nafplion

“A journey to revolutionary Nafplion” takes visitors on a tour to the town of Nafplion during the Revolution of 1821. Created in cooperation with the Peloponnesian Folklore Foundation, this educational program is aimed at primary and secondary school students and for adults who want to learn about the story of Nafplion and its role during the Greek War of Independence. The self-guided digital tour consists of 52 items including artworks, statues and monuments that still adorn the capital of the First Hellenic Republic. Images of paintings and 360 degrees photos are accompanied by 73 stories that users can listen to on their headphones through audio narrations. Stops include the National Gallery – Nafplio Department, the park and statue of Theodoros Kolokotronis, Nikitara Square and of course the Peloponnesian Folklore Foundation “Vasileios Papantoniou”. Some of the artworks that are highlighted and explained for their meaning and significance in the art movement are “Battle of Dervenakia” by Theodoros Vryzakis, Dionysios Tsokos’ “The death of Marcos Botsaris” and “The admiral Andreas Miaoulis” by Andreas Kriezis.