Seville, the capital of Andalusia is well known for its cultural heritage, its traditions, and its traditional cuisine. A city full of life and endless possibilities, Seville is bound to keep your interest alive. Here are the 10 reasons why you should visit Seville at least once in your life.

From going on a boat tour in the Guadalquivir river to learning how to dance the flamenco and tasting new dishes, the Andalusian capital is the perfect destination for nature lovers and culture buffs. Visitors will find numerous opportunities for both outdoors and indoors activities throughout the whole year.

It is home to the largest Gothic Cathedral in the world 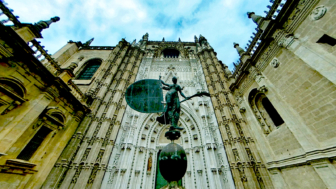 Stroll around the neighborhood of Santa Cruz (Barrio de Santa Cruz), which used to be the Jewish quarter and Seville’s old city center. Featuring narrow alleys that form a labyrinth, this district invites you to wander around. It’s easy to get lost among the jasmine-scented streets but that’s part of the fun. This district is filled with traditions and stories such as the legend of Susana Ben Susón, known as La Susona. Versions of the legend vary, but it’s generally agreed that a young Jewish woman named Susona lived in the home in the late 15th century. Her father was involved in a plot against the local authorities, only to be betrayed by Susona herself as well as her lover, a Christian.

Take a break from sightseeing and have some fun in the water. Many sports activities take place in the Guadalquivir river inviting locals and tourists to experience the river in a totally different way. Go on a kayak tour or try SUP yoga to combine your yoga skills with paddle surf. If you want to see Seville from the water but prefer not to break a sweat, take a boat cruise. There are many companies organizing day and night cruises. All you have to do is pick a place on the boat and enjoy the captivating surroundings. When your tour ends, you’ll find many bars, restaurants and cafes on shore to spend your evening or enjoy a night out.

The Real Alcázares of Seville

The Royal Alcázares is one of the top monuments in Seville. Constructed during the period of Islamic domination, the Alcázares was initially the residence of Muslim emirs and princes. Over the years it became a palace housing several royal families. Its architecture and interior design reflect different eras and civilizations witnessing the royal palace’s diverse and fascinating history.

The parks and squares

Maria Luisa Park (Parque de Maria Luisa) is one of the city’s most beautiful parks and definitely one of the main reasons why you should visit Seville at least once. Located in Plaza España to the south of the city center, the green area features hundreds of exotic trees lining shady avenues and historic, fairytale buildings. Exotic touches provided by colorful tiled benches, Moorish fountains, and pools compose a unique scenery that bears witness to the city’s multicultural past. Glorieta de Los Lotos, the Jardín de Los Leones, Monument to Bécquer and the Fuente de las Ranas are the most popular parts of the Maria Luisa Park. Make sure to discover every sculpture and monument and explore every hidden corner.

You can take a Flamenco class

Flamenco is one of the most romantic dances worldwide. It is well known for its movements on waving with the hands and stomping of the feet. Even though there are many types of flamenco dances and all of them are very complicated to learn, travelers visiting Seville will find many classes for beginners. You can join a group class or a private lesson. Whether you decide to take a class or not, you must definitely watch a Flamenco show. Casala Teatro, which is known as the “Smallest theatre in the world” in the Triana Market is a great place to watch a breathtaking flamenco show.

There are numerous museums

There are numerous museums in Seville that are worth your visit. Choose which era you want to explore and dive into the city’s culture. Our two most favorites are the Museum of Fine Arts and The Flamenco Dance Museum.

If flamenco fascinates you then a visit to the Museo del Baile Flamenco (The Flamenco Dance Museum) is definitely a must. Even though the museum space itself is small, 18th-century paintings, sketches, photos, and various traditional garments give visitors an introduction to the history of Flamenco.

Seville’s traditional cuisine will definitely tickle your taste buds. It’s without a doubt one of the 10 reasons to visit Seville at least once. From seafood dishes to the meat specialty Secreto Iberico, there are many options for all tastes. Among the must-try dishes are Salmorejo (Cold Tomato Soup), the Pringa (Pork Stew Spread), the Caracoles (Snails) pork in whiskey, Serranito de Lomo and spinach and chickpeas. Whether you choose a gourmet restaurant or a traditional bodega, the local cuisine won’t disappoint you. And if you want to eat like a real Sevillano, you must certainly go for tapas and wine. Bodega Donaire in the Alfalfa neighborhood has a great atmosphere and a diverse menu.

The Doñana National Park (Parque Nacional de Doñana) is the perfect place for a one-day trip to the great outdoors. Take a walk to explore every part of the park, learn horseback riding and hone your boating skills. Throughout the whole year, you can go birdwatching with your friends and families to see numerous different bird species such as Adalbert’s eagle, the black vulture, white-headed duck, and the Spanish imperial eagle. In the summer, the Park welcomes the famous pink flamingos, which reach Doñana to nest. If you’re in the city during the summer months don’t miss out on watching this mesmerizing sight.