Would you like to feel that you are at the world’s edge, surrounded only by the sea and the sauvage landscape? In that case, Gramvousa is the right place for you. The islet is located on the northwestern part of the island, especially northwest of Kissamos, in the Gramvousa Peninsula.

Two islands, one name: Actually, two small islands share the name Gramvousa. The one where the fortress is located is called Imeri Gramvousa (Tame Gramousa). You can access and pay a visit to the Venetian castle and the wreck and observe the different and numerous species of plants. As its name suggests, the Agria Gramvousa (meaning Wild Gramvousa) is an entirely wild islet where access is challenging.

Revealing the ancient past: The antique name was Korykos (meaning leather bag), and according to Homer’s Odyssey, it was the homeland of the God Aeolus, the God and keeper of the winds. Even though the researchers do not all agree with that suggestion, the location seems ideal for this windy God’s home!

How do you go there? To visit the Imeri Gramvousa (one of the two islands), you must go to Kissamos and take a boat. It’s good to know that the boat stops for about 90 minutes at Imeri Gramvousa. The boat stops there before going to Balos, the final destination.

The betrayal: When Venetians conquered Crete, they changed the islet’s name, Gramvousa, after the Italian word Garabuse. Its unique geographical location and morphology led the Venetians to build a fortress to protect the entire northeastern Crete, offering a secure passage to ships sailing from Venice to Crete. The impressive castle in a triangle shape was constructed between 1579 and 1584-even though it was rebuilt in 1589- and could accommodate 3.000 men! In 1662 the Ottoman Turks conquered Crete but not Gramvousa. They had to wait until 1692 when they bribed the garrison commander. The captain became known as Captain Gramvousa and happily lived in Constantinople (Istanbul nowadays), where he gained specific authority from the Ottomans.

No man’s land:  After its conquer, the islet was abandoned and lost in oblivion. During the Greek War of Independence, the Cretans fought against the Ottomans. Despite their bravery, Crete was not liberated. Instead, in 1825 Gramvousa became the emblem of rebellion since it became the seat of the Revolutionary Committee of Crete. Around 3.000 persons, including women and children, occupied the island living in extremely harsh conditions and resisting the Ottomans and Egyptians who laid siege. The siege lasted three years and contributed to the birth of a legend.

Good to know before you go: It’s good to know that the island is not inhabited and there are no facilities. So, you must bring food and water and protect yourself from the sun since there is no shadow. The islet and the wider area (including Ballos) are protected areas in the Natura 2020 program. Therefore, camping is strictly forbidden.

The legendary pirates: The siege of Gramvousa led the inhabitants to illegal methods to find food and all the means to keep fighting. The pirates of Gramvousa became known throughout the European continent. The most prominent pirate was Emmanuel Antoniades, the man who had already taken the campaign’s leadership against the Turkish Occupation in Crete. Piracy became a sort of business, and Antoniades was the chief! Their fleet attacked every vessel found on the high seas, even beyond Sicily or towards the Atlantic sea. The spoils were divided and distributed to the inhabitants of Gramvousa, while an amount was used to maintain the piracy! The Gramvousa pirates became a true nightmare.

The remains of a glorious past: The castle stands fiercely on the island even though the glory days have gone. Still, there are some remains of the time of pirates. You can see what was left of the houses even though the British forces demolished 193 houses to prevent the pirates’ return. On the island’s highest point, you can visit the Church of the Virgin Mary, built in the 16th century. The people of Gramvousa and the pirates who called her Virgin Mary of the Thieves worshipped the Virgin. They adorned the shrine with loot and asked her to intervene with God to be forgiven for their sins!

Are you curious why the pirates were defeated? Take a look at the cisterns! The water was crucial for survival and became the cause of the surrender… 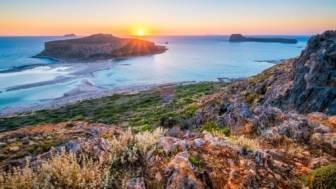