If you have been to Crete even once in your life, you’re already familiar with the excellent tastes and smells of the traditional dishes that never miss from any family table. What are the origins of these dishes though and which ones of the nutritional habits of Minoans survive to this day? A place’s culture consists of various elements and food is certainly one of them. Take a look at the dining tables and the palace’s storage rooms of ancient Cretans.

Most people are the Mediterranean diet and its health benefits that derive from the combination of fresh ingredients and local products. You’ve probably already heard of souvlaki, moussaka and Greek salad. In ancient times, though, these words were unknown. Ingredients may be the same but the final dishes that ended up on the table were way different.

The eating habits of the Minoan civilization are associated with great diversity and are based on the Mediterranean diet. From ancient times, the island of Crete, due to its strategic location, had contacts with the East, thus incorporating various characteristics in its diet while retaining the elements of nutrition it had acquired from the Mediterranean basin.
The Minoans consumed the products they made themselves. We could say that the holy quadruple of the ancient Cretan diet, were cereals, legumes, wine and olive oil.

The ancient Minoans cultivated many types of cereal grains, such as barley and wheat that were of particular importance throughout the Bronze Age. No wonder, that the majestic palaces of Crete featured storage rooms where large quantities were reserved. In fact, the findings of the excavations of the famous archaeologist Arthur Evans have revealed remains in jars in the palace of Knossos and the cape of Thera.

Cereals, flour and fruits were an integral part of Cretans’ daily eating habits. Locals made different types of bread, sweets and flours, while they also frequently used barley, malt and millet, an ingredient for making bread and pasta.

Legumes were not only rich in protein but also a good natural source of energy. Therefore, they were widely popular among Minoans who ate a good portion after a long day of hard work. Lentils occupy the first place on locals’ lists, followed by other varieties such as chickpeas, peas and broad beans cooked in soup or in combination with meat or vegetables.

The high-quality Cretan vineyards generously offered to ancient Cretans everything needed for the preparation and fermentation of the wine. A glass of wine usually diluted with water was an integral part of ancient Greeks’ meals and it is still considered Greece’s most popular traditional drink. Like nowadays, in ancient times, Greeks shared wine on the dining table with good company and it was a way of socializing and celebrating with friends and family.

The olive is the center of the Cretan diet. The systematic production of olive oil begins in Crete during the second palace period, but its use is not limited to culinary processes, as it was also used in the preparation of medicinal and aromatic oils.

From murals found in the palace of Knossos and beyond, we find many scenes with fish and mollusks, which bears testimony to the intense fishing activity. The famous mural by the name ” fisherman ” which was found in Thira, dates back to 1650 B.C. and it pictures a fisherman of that period holding two ropes with fishes attached to them. Some fish species are well-known for been used to make a kind of paste, commonly called the “garos.” This paste was made with salt and was a very common meal for ancient Greeks since it was very cheap to make. Meat was also consumed but in limited and small quantities as the Mediterranean diet suggests.

Kitchens in Crete as in the rest of Greece were similar to the ones you’ll see in houses nowadays and some of them had an oven or a stove.
Numerous tripods cookware and pots of the Minoan era and grill dishes have been found while the kitchen utensils were made of clay. Cooks should have a little experience to handle the temperature of the fire skillfully, especially if there were external difficulties such as strong wind.

Since ancient times and until nowadays the Cretan cuisine has been following the Mediterranean diet. Salads, soups, sweets and meals are cooked in a delicious and at the same time healthy way. For locals though what matters the most is the good company and that’s what you should keep in mind the next time you’ll visit this majestic Greek island.

Knossos: Self Guided Tour On Your Phone 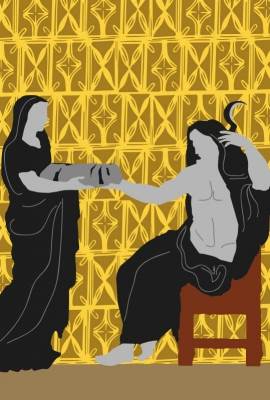