Game of Thrones, the TV series phenomenon based on George R.R.  Martin’s book “a song of fire” was recently completed, leaving the fans devastated. Binge watching the series for the fourth time made me realize that the unforeseen stories, the ghastly crimes, and the breathtaking scenes, all felt very familiar. Growing up, I was fascinated by Greek mythology and while watching Game Of Thrones I simply couldn’t get past the fact that the myths and the series shared so much in common. Wars, love stories, betrayals, deaths, and incest was the icing on the cake. Here are three GOT stories that echo ancient Greek mythology.

Didn’t take a while to understand that Lannisters not only they do pay their debts but they incest as well. The twin siblings of Lannister’s royal family, Cersei, and Jaime were closer than expected. Although Cersei was married to King Robert Baratheon, she managed to get pregnant three times and raise her brother’s children.

They almost lived happily ever after. This illicit story brought to my mind the ‘’it couple’’ of ancient Greek mythology. Everyone acknowledges Zeus, the god of gods, and Hera, his beautiful wife, the goddess of women. The unanticipated part of their love story, which, still remains unknown to many people, is that they were siblings too.

Hera gave birth to his children but he never stayed faithful to her. Zeus was indulging in a scandalous life while his jealous wife was trying to compete against his lovers. “Oh, the things she does for love.”

The vicious dead and their safe heaven

Halfway through the series, we were introduced to the character of the Night’s King, the vicious leader of White Walkers who wanted to erase every living creature. Before attacking the mortals, the King and his army of the dead lived beyond the wall.

Have you ever wondered which would be Night’s King favorite vacation destination? I suppose that after all the fighting he would probably choose the region of Mani in the Peloponnese as it was once believed to be the entrance point of Hades, the world of the dead. In Greek mythology, Hades was our unique Night King, the ruler of the dead, the king of the underworld and brother of Zeus.

Humans were too afraid to call his name, they often referred to him as “Plouton”. Feeling lonely with the dead, he forcefully abducted his niece, Persephone, to keep him company in Hades.

The betrayed daughters and the lovely weather

The night of Shireen Baratheon’s sacrifice was definitely dark and full of terrors. The father betrayed his daughter and led her into flames on his attempt to praise the Lord of Light.

Bewitched by Melisandre, he truly believed that killing his beloved daughter would make the snow melt. This is not the first story about a father who betrayed his own child in order to have favorable weather conditions during times of war. 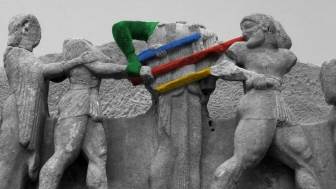 Delphi: The Google of The Ancient world
Audio Tours

In Ancient Greece, it is believed that Agamemnon secretly lured his daughter Iphigenia to death by lying to her. His ultimate goal was to praise the goddess Artemis so that the winds could enable his warriors to sail.

To all the devoted Game of Thrones fans who will probably watch it again, keep this as a reminder that the ancient myths we learned as kids can sometimes hide unexpectedly in the plot of our favorite TV show! It might change your whole point of view. In case you discover more mythology-related stories, we can’t wait to hear them.