It is hard to imagine that a passionate collector of books, based in Paris, in the early 19th century, wanted to donate his collection of 3696 rare titles to a small mountainous region of  Ilia in Greece, the village of Andritsaina. This man had never come to Greece and his only connection to the place was the fact that it was his father’s birthplace. The collector was Konstantinos Agathofron Nikolopoulos (1786-1841), born in Smyrna, and a teacher of Greek literature in various educational institutions. This is the story of The Historical Library of Andritsaina.

With a letter to his compatriots, Nikolopoulos informed the municipality of Andritsaina about the impending donation of his library collection. Making a brief assessment of his 30-year stay in Paris, he expresses a desire to move to his place of origin and live there until the end of his life. In June 1841, Nikolopoulos died suddenly in Paris.

The books he loved so deeply seem to have brought about his premature loss.  What seems most likely is that he was wounded while he was cleaning and crating his books. The wound was deep, it got quickly infected and Nikolopoulos, eventually, died of Tetanus a few days later at the Hotel Dieu Hospital in Paris.

Today, this donation is kept in Andritsaina’s Historical Library, also known as “Nikolopoulios”, which is one of the most important libraries in the country. The library features some stunning samples from the long history of printing and publication. Unique titles of Greek, Latin, and French authors stand out for their excellent bookbinding, while you are also going to discover some rather rare manuscripts, such as a handwritten letter by general Kolokotronis, a hero of the Greek War of Independence. 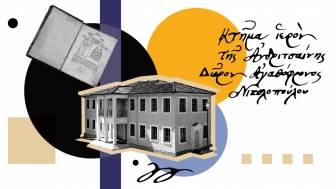 Another highlight to admire throughout your visit is a very old edition of Pindar’s “Victory Odes”. Of course, all this will be revealed to you in the most engaging way, as you listen to Clio Muse’s fascinating stories about the exhibits with our latest free self-guided audio tour.

That said, we shouldn’t fail to notice that all of us in Clio Muse are very proud to preserve through our application the history of such an important library and narrate its stories to thousands of Greek and foreign travelers.

Tip: If you stay in Andritsaina for a few days you will have the chance to visit some other interesting sites, such as the Museum of Folk Art and the legendary fountain of the village, the so-called Trani Vrisi, as well as the world heritage UNESCO monument of the Temple of Epicurius Apollo.