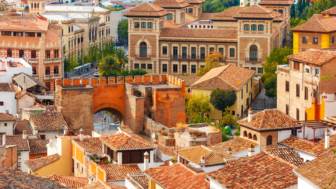 No other city exemplifies the spirit of Medieval Islam in Spain as tangibly as Granada! In 1492, the city was conquered by the Catholic Monarchs, but its Moorish aura never faded out; the “comfortable Orient”, as romantic travelers would call it. Let’s discover the stories of stellar landmarks, such as the Alhambra palace, and many hidden gems.

Listen to fascinating stories, based on an award-winning storytelling concept, and gain great insights into the captivating history of Granada. Start your tour from Plaza de Bib Rambla, one of the frequented places  of the city, and then continue to explore the best sites of Granada, feeling like a local. This is an unmissable opportunity to experience at your own pace this beautiful city of Andalusia and find out the hidden corners of it  with a captivating audio tour on your phone.

On the corner of the plaza and Salamanca street the original Bib Rambla was once located, a medieval archway that was demolished in 1884. From here travellers gained access to the city from 1230 until the Christian conquest. Granada was then ruled by the rich Nasrid dynasty. The Arabs had arrived in Spain in 711 to found an empire that by the 10th century had become a powerful Caliphate with Cordoba as a capital city, the so-called al-Andalus, after which the region is currently named. The Empire fell apart a century later and smaller kingdoms tried to resist the advance of Christian armies from the North. The last of those Muslim kingdoms was Granada. With silk and other goods flowing from the East and with the wealth of the land, the Nasrids managed to hold strong and reign for over 250 years.

The entrance ticket for museums, churches or other attractions is not included 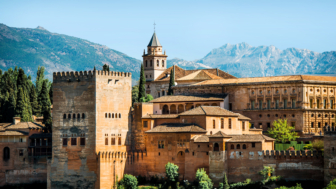