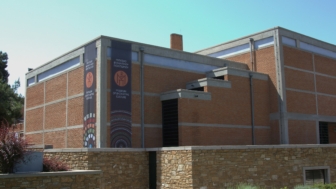 Museum of Byzantine Culture: a guide to Byzantine Thessaloniki

Museum of Byzantine Culture: a guide to Byzantine Thessaloniki

An imperial city deserves a museum able to display its rich cultural heritage. The Byzantine Empire was a political, economic and cultural powerhouse for a millennium and Thessaloniki was its second most important city after Constantinople. The Museum of Byzantine Culture opens a stunning window to a civilisation unlike any other.

Waltz in the Museum of Byzantine Culture in Thessaloniki with a self-guided audio tour on your phone designed by an accredited expert. Listen to fascinating stories, based on an award-winning storytelling concept, and gain great insights into one of the most iconic museums of Thessaloniki. Start your tour from the entrance of the museum listening to the stories about its foundation, and continue to meet the Wall mosaic from Acheiropoietos Church, the St Demetrius orans and donors mosaic, getting acquainted with the  Silver reliquary, the Triclinium from a house in Thessaloniki and The tomb of Susanna, among other treasures.

This is an unmissable opportunity to experience at your own pace the Museum of Byzantine Culture in Thessaloniki with a captivating audio tour on your phone.

* * Entrance fee to the museum is not included.

European Museum of the Year

The wealth of mediaeval archaeological discoveries in Thessaloniki required a proper museum for their exhibition. The first proposal was submitted in 1913, but it was only eight decades later that the Museum of Byzantine Culture was finally ready to receive its first guests. The building was designed by the internationally renowned architect and painter Kyriakos Krokos, who envisioned ‘a space where movement gives a sense of freedom by invigorating the senses, and where the exhibit becomes a surprise during movement’. Krokos’ design received widespread acclaim. In 2005, the Museum of Byzantine Culture received the “European Museum of the Year” award. The collection includes more than 46,000 artefacts dating from the second to the twentieth centuries.

Entrance of the Museum

The tour ends at the entrance of the Museum of Byzantine Culture in Thessaloniki (Leof. Stratou 2, Thessaloniki 546 40).

Entrance fee to the museum is not included. 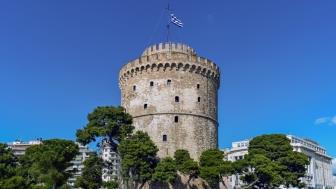 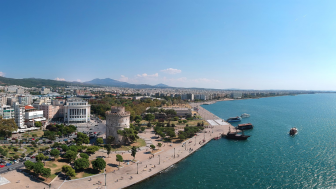