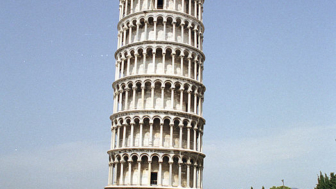 The Tower of Pisa: a miracle in a field of wonders

The Tower of Pisa: a miracle in a field of wonders

Waltz in the Piazza del Duomo and the Leaning Tower of Pisa with a self-guided audio tour on your phone designed by an accredited expert. Listen to fascinating stories, based on an award-winning storytelling concept, and gain great insights into one of the most iconic landmarks of Pisa. Start your tour at the Porta Nuova, the entrance to the Piazza del Duomo.

This is an unmissable opportunity to experience the Leaning Tower of Pisa and the Piazza del Duomo at your own pace with a captivating audio tour on your phone.

* * Ticket/entrance fee to the Leaning Tower of Pisa or any of the other monuments in the Piazza del Duomo is not included.

The gate that you are about to go through is called New because it was drilled into the preexisting mediaeval walls in 1562 by Cosimo I de Medici of Florence. Pisa at the time was already annexed by the Republic of Florence. Its use as the main entrance into the Piazza dei Miracoli quickly eclipsed the two previously used gates: the gate of Santa Maria and the gate of the Lion, which were part of the original twelfth-century fortifications. The Lion Gate can be seen to the left of the cemetery, known as the Camposanto, once you have the chance to wander around in the Piazza. Other than just providing access to the Piazza del Duomo, the Porta Nuova is also one of four gates into the city of Pisa itself.

The self-guided audio tour is designed to start at the Porta Nuova in the Piazza del Duomo, where the Leaning Tower is located (Piazza del Duomo, 9, 56126 Pisa PI, Italy). The easiest way to get there is on foot from the city centre or by bus. A number of buses (LAM rossa, serving the airport and central train station, Linea 21 and others) drop you off at the Torre 1 bus stop, slightly to the left of the Porta Nuova.

The tour ends at the iron gates that open into Via Cardinale Pietro Maffi. This road leads straight back into the old town of Pisa, and is easily walkable.

Ticket/entrance fee to the Leaning Tower of Pisa or any of the other monuments in the Piazza del Duomo is not included. 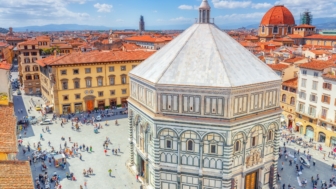 Florence Baptistery and the New Opera Duomo Museum: Skip the line e-ticket & 2 Audio Tours on your Phone
Skip the Line Tours
From: 32,00€ per person